Posted on December 14, 2013 by suwalkigermans

Great-grandson of August Spurgat, who now lives in Germany had written:

Gutkaimas/Gudkaimas is close to Kibarty/Kybartai, Lithuania. In the 1930s the August Spurgat family (younger half-brother of Adolph and younger brother of Josof Spurgat) went to the property of Karolis Baldamas in Gudkaimis close to Kibarty/Kybartai. The family lived in a working-class house (as my father told me that some of the] brothers from August lived there, too). August worked as a wheelwright and joiner and as a carpenter and cartwright; his wife Anna Raudonat and their children Berta, Emma, Oskar, and Karl helped on the property. August’s brothers may have worked as roofers. (According to the birth records, August’s brothers were Ludwig and Albert.)

After some years they moved to Gudkaimis which was situated a few kilometers north of Kibarty/Kybartai. There they probably lived till 1939; afterwards they were scattered by the war events. As my father tells, German was spoken in the family and all were christened Protestant.

At the beginning of World War II men were called to the army and the rest of the family had to leave Gutkaimas/Gudkaimis; they went to different directions; their tracks blurred, and several got lost.

In Gutkaimas/Gudkaimasour local guide phoned his counterpart, who is also the chair of the advisory town council.

Our Gutkaimas/Gudkaimas local guides told us that in the 19th century Gutkaimas/Gudkaimas had been a 180 hectare manor known for its apple trees and gardens. The manor also specialized in cows, pigs, and grain. It also housed a dairy, a blacksmith shop, and two dorms for workers. This manor, and others like them, was owned by Germans, possibly because nearby Wirballen/Virbalis had been settled by German Salzburgers in 1731. So the German manor name meant “good manor.” The village name means “goodness” or “kindness.”

At the beginning of its existence the German manor or farmstead employed people who spoke German; by the end of its existence the Lithuanian language was used. This local guide told us that the manor was owned by a German named Baldam! This name matched the name of the owner that the great grandson of August Spurgat had given us: Karolis Baldamas. Our local guide continued: He had two sons and a daughter who attended a German school in Eydtkuhnen, now just across the border in what is now Chernysheskoye, Kaliningrad Oblast, Russia. At that time it must have been very easy to cross the border into East Prussia. Not so today.

The owner of the manor is also mentioned in a village song illustrating the happiness of those who live there today. The words are “where Baldam used to live we make our life.”

At the community center he pointed to a 1946 map from the Soviet era. The map measured 36 x 40 and covered one kilometer of land so the map was very detailed—it showed every building, local landmark, and stream. At the bottom of the map was a list of landowners. The Spurgats were not among them as they had not been landowners and left during the war. As Germans, they certainly were gone by August 1944 when the Soviets began their 50 year occupation.

During his discussion with Vilius, our local guide in Gutkaimas/Gudkaimas remembered a book that a neighbor had so he ran to his bike, peddled it down the street, and returned with the book, written in Lithuanian!

He also provided us with an attractive 16 page 6” x 8” colored brochure of the village.

The forge on the Gutkaimas Manor 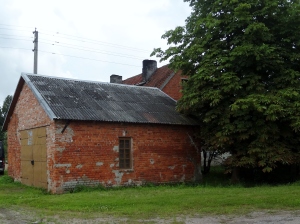 The Lithuanian word from the caption on a brochure enabled the author to use Google Translate to identify this particular building which the author had photographed during her visit. 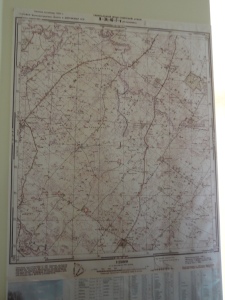 This military like map showed every building, tree, stream, etc. of the Gutkaimas area. The Spurgats were not landowners nor were they present circa 1946 when the map was made. By this time almost all of the Germans had fled from the area.

I started family research in 1993. My first two books focused on my maternal grandparents. Both families came from Kreis Rosenberg, West Prussia, to Big Rapids, Michigan. I left the Spurgats from Wylkowiszki in the Russian Empire as the third book because of the difficult and challenging research it required. After I published the book in 2010, I wondered what to do next. I thought I might try to share some of my research with others and maybe at the same time, by going digital, someone would find me. When you read the comments, you will see that happened. The best part of all this is helping others.
View all posts by suwalkigermans →
This entry was posted in Family History Tour, Suwalki Province, Uncategorized, Villages and tagged Suwalki. Bookmark the permalink.