Posted on October 2, 2013 by suwalkigermans

Dydwiże/Didvyziai was a Spurgat “home” for two generations. The family of Anna Ber/Berz Spurgat also lived here. Johann and Anna were married here in 1865. Anna died here in 1874. 5 sons were born here. It is also the:

Manor where Johann Spurgat and his parents lived.

Manor where Anna Ber/Berz and her parents lived.

Earlier Vilius had said that the museum in Sudava/Didvyziai was located in a building of Didvyziai manor; the curator of the museum and a local guide familiar with the area will be able to help us find the nearby places.  He had also written, “She is advised to concentrate on Lutheran history of the area.”

As a long time teacher in Sudava, the next village west of Dydwiże/Didvyziai, our local guide knew many people, including one of the deputy directors of the Dydvyziu socialines globos Namai, the Didvyžių social care home, formerly the Dydwize Manor, which has been used for “social care” from 1933 to the present time. She had applied to the authorities and received special permission to allow us on the grounds of this property, now the home of over 286 adults with disabilities.

Vilius parked his car in a spot especially reserved for us, and we were immediately greeted by the director of the home and two deputy directors. Soon we were surrounded by curious adults who were wondering about these visitors.

We learned that, a Polish noble, Leonas Geistaras, had purchased this property in 1808 and that around the middle of the 19th century the Geistaras family started to construct the manor buildings, including those which we saw: the manor house (greatly modified), a barn, a well, living quarters for workers, a brewery, and a refrigeration house. 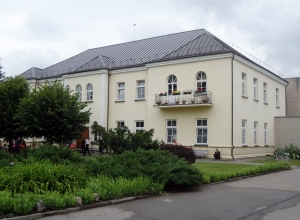 The manor house, greatly modified, but a historical black and white photo shows the original appearance.

Another black and white historical photo shows a similar view. I did not discover the similarity until I arrived home.

Possibly the brewery or brickmaking building. 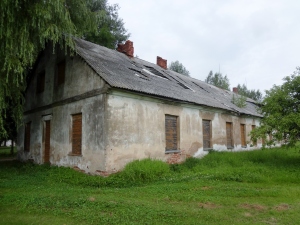 Didwize Manor Farm Workers’ Building. Even though the building has been stuccoed, the red brick is visible near the foundation.

Around 1920 when Lithuania became an independent country, the manor became the property of the Lithuanian state. About 1928 the manor was established as a place for social care and was no longer linked to the owner.

A Brief History of the Dydwize (Geistaru) Manor from internet Sources

In the 18th century when the Geistaru family owned the mansion, people called the manor and the village Geistaru.The Skriaudupio stream ran near the estate. An 1808 shows the name of this location as Dydwize in Polish. (In my examination of the records I never saw the name Geistaru so I think that Dydwize/Didvyžiai was most commonly used). In the 20th century the Lithuanian Didvyžiai was used.

The property continued as a manor until Lithuania became an independent country. In the 1923 general Lithuanian census, Didvyžių parish and manor had a total of 174 people, 152 of whom lived in the village (bažnytkaimyje) and 22 on the estate.

From 1920–1992 the village of Didvyžių had a primary school. In 1933 the retirement haven that exists today was established.

Although we saw many remnants of the Geistaru Manor, we neither saw nor were we directed to the village. All we saw was the red brick church described below.

The St. Pope Leo II church stands in Didvyžiai village, 5 km north of the railway station for Vilkaviškis in Big Szelwy, the home of Anna Raudonat and the birthplace of her daughter, Berta Spurgat in 1908 which we would visit the next day. By 1850 the Didvyžių (Geistaru) manor chapel had a permanent priest. In 1885 the Lord of the manor, Leon Geištaras, decided that the chapel was out of date and he had the present brick church built. The church is rectangular, one tower with a lower apse. The churchyard fence enclosed other wooden structures. In 1944 the building was degraded when holes were punched in the wall.  Russian soldiers looted and burned the wooden part of the church, leaving only the high altar. The church was rebuilt in 1945.

In retrospect, of all the villages or manors that we saw, this was by far the most complete, probably because of its ownership by the Lithuanian government and its long standing use as a social care facility.

I started family research in 1993. My first two books focused on my maternal grandparents. Both families came from Kreis Rosenberg, West Prussia, to Big Rapids, Michigan. I left the Spurgats from Wylkowiszki in the Russian Empire as the third book because of the difficult and challenging research it required. After I published the book in 2010, I wondered what to do next. I thought I might try to share some of my research with others and maybe at the same time, by going digital, someone would find me. When you read the comments, you will see that happened. The best part of all this is helping others.
View all posts by suwalkigermans →
This entry was posted in Family History Tour, Suwalki Province, Uncategorized, Villages and tagged Suwalki. Bookmark the permalink.