“Map of the History of the German Settlement in Lithuania”

Posted on February 3, 2013 by suwalkigermans 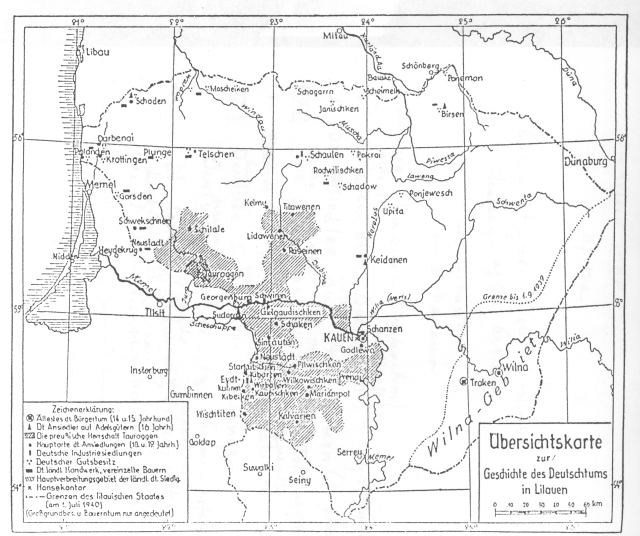 This map shows the evangelische (Lutheran) churches in Lithuania as recalled by the authors of Bilder aus der Geschichte des evangelischen Deutschtums in Litauen, illustrating the borders of Lithuania. Eydtkuhnen is on the border between East Prussia and the Russian Empire; Gumbinnen is the headquarters of the German administrative district of East Prussia.

When the book was published in 1964, the land that had been East Prussia became part of the Union of Soviet Socialist Republics (USSR) in 1945 and remains in the Kaliningrad Oblast, Russia, today. In the upper left in Memel names with the /–at/ endings were prevalent as well as in Heydekrug and Tilsit. Records of other –at families were found in Goldap, East Prussia.The German spellings of places like Wilkowischken, Mariampol, and Pilwischken are noticeable.

I started family research in 1993. My first two books focused on my maternal grandparents. Both families came from Kreis Rosenberg, West Prussia, to Big Rapids, Michigan. I left the Spurgats from Wylkowiszki in the Russian Empire as the third book because of the difficult and challenging research it required. After I published the book in 2010, I wondered what to do next. I thought I might try to share some of my research with others and maybe at the same time, by going digital, someone would find me. When you read the comments, you will see that happened. The best part of all this is helping others.
View all posts by suwalkigermans →
This entry was posted in Ethnicities, history, Maps, Suwalki Province, Uncategorized and tagged German. Bookmark the permalink.